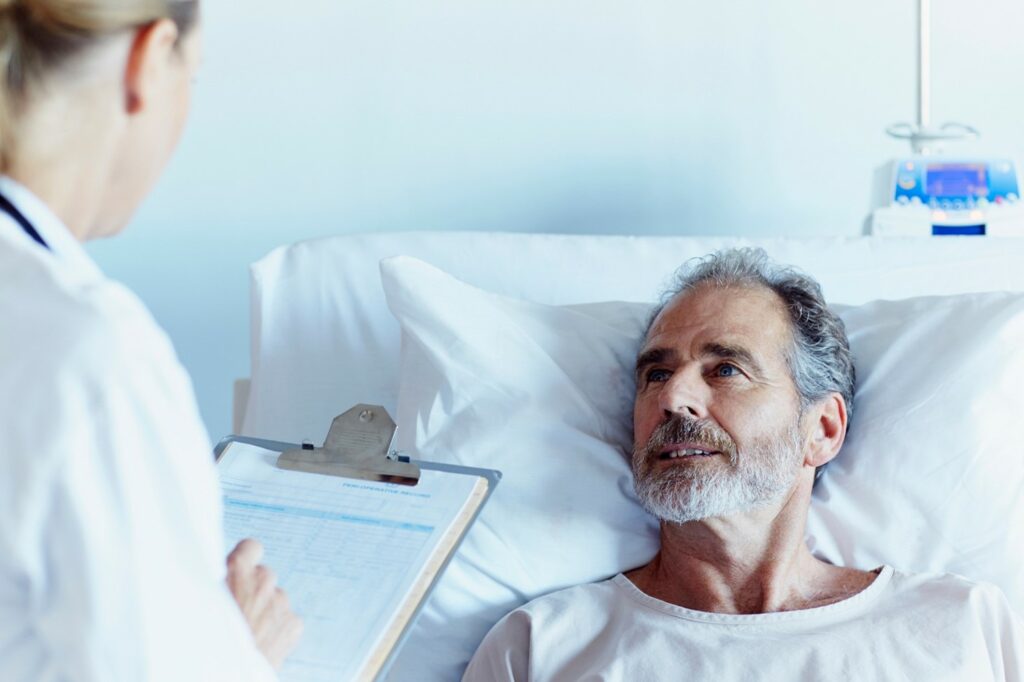 Combination therapy with bendamustine and rituximab has become one of the most-used first-line regimens for older patients with mantle-cell lymphoma (MCL). Single-agent ibrutinib has shown durable activity in this setting, particularly when used at first relapse. In the phase 3 SHINE trial, the addition of ibrutinib to the bendamustine + rituximab combination  resulted in a significant prolongation of the median PFS in older patients with previously untreated MCL.

Mantle-cell lymphoma (MCL) is considered to be incurable since most patients are older and unsuitable for aggressive treatment or autologous stem-cell transplantation. Combination therapy with bendamustine and rituximab shows longer progression-free survival (PFS) and better safety profile than R-CHOP (rituximab, cyclophosphamide, doxorubicin, vincristine, and prednisone). Consequently, the bendamustine + rituximab regimen has become one of the most-used first-line regimens for MCL. A phase 1b study involving patients with untreated, relapsed, or refractory MCL showed that the addition of ibrutinib, an oral Bruton’s tyrosine kinase (BTK) inhibitor, to this combination was safe and efficacious. The phase 3 SHINE trial evaluated the combination of ibrutinib + bendamustine + rituximab vs. placebo + bendamustine + rituximab, both followed by rituximab maintenance, to treat older patients with untreated MCL. The primary results of this study are presented here.

The international, randomised, double-blind, phase 3 SHINE trial enrolled previously untreated patients with MCL with cyclin C1 overexpression or translocation breakpoints at t(11;14). Eligible patients had to be ≥65 years old, have a documented stage II to IV disease, at least one measurable site of disease that was at least 1.5 cm in the longest diameter, an Eastern Cooperative Oncology Group performance-status score of 0 or 1, and an adequate organ function. Patients were randomly assigned (1:1) to receive either ibrutinib (560 mg orally, once daily) or matching placebo. Ibrutinib or placebo was administered in combination with bendamustine (90 mg/m2 of body-surface area on days one and two of each cycle) and rituximab (375 mg/m2 on day one of each cycle), which were administered every four weeks for six cycles. Patients with an objective response (complete or partial) received rituximab maintenance therapy, administered every eight weeks for up to twelve additional doses. Randomisation was stratified according to the simplified Mantle Cell Lymphoma International Prognostic Index (MIPI) score category (low, intermediate, or high risk). The primary endpoint was PFS. Secondary endpoints included complete response, overall survival (OS), objective response, or undetectable minimal residual disease.

In the SHINE trial, the addition of once-daily ibrutinib treatment to bendamustine plus rituximab and rituximab maintenance therapy led to a significant prolongation of 2.3 years in median PFS (6.7 years, vs. 4.4 years in the placebo group) among older patients with previously untreated mantle-cell lymphoma. The safety profile of the combined therapy was consistent with the known profiles of the individual drugs.