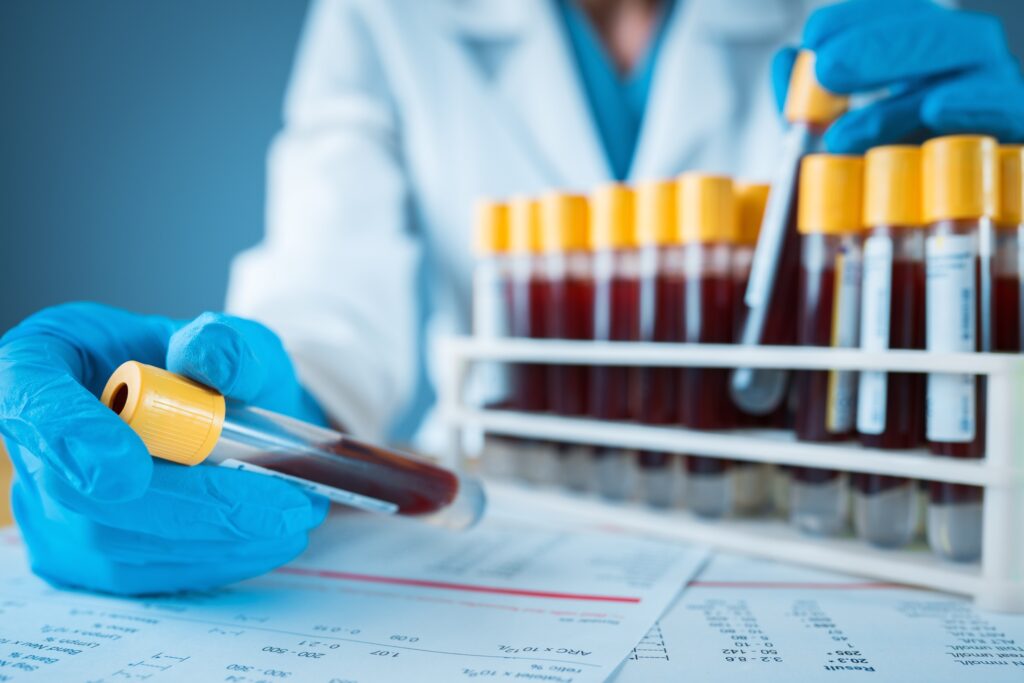 Combining zanubrutinib with obinutuzumab and venetoclax (BOVen) as an initial therapy for chronic lymphocytic leukaemia and small lymphocytic lymphoma resulted in high rates of undetectable minimal residual disease (MRD) in both peripheral blood and bone marrow despite a median treatment duration of only 10 months. Interestingly, treatment duration was guided by early MRD response.

“These are promising data of an MRD driven discontinuation treatment regimen combining obinutuzumab, venetoclax and zanubrutinib in frontline CLL patients. Treatment was discontinued in 89% of patients based on undetectable MRD in blood and bone marrow and this after a median of 10 cycles of therapy. After a median surveillance after treatment of 15.8 months (IQR 13.0–18.6), 31 (94%) of 33 patients had undetectable MRD.”

This multicentre, single-arm, phase II trial enrolled patients with CLL or SLL from two academic medical centres in the USA.  Eligible patients were at least 18 years old, were treatment-naïve and had an Eastern Cooperative Oncology Group performance status up to two. BOVen was administered in 28-day cycles. Oral zanubrutinib was administered at 160 mg twice per day starting in cycle one on day one. Intravenous obinutuzumab was given at 1,000 mg on day one (split over day 1 with 100 mg and day 2 with 900 mg for an absolute lymphocyte count >25,000 cells per μL or lymph nodes >5 cm in diameter) on day eight and day fifteen of cycle one, and day one of cycles 2-8. Venetoclax was initiated on day one of cycle 3 with a five-week ramp up to 400 mg administered orally per day. Treatment was discontinued after 8–24 cycles when pre-specified undetectable MRD criteria were met in the peripheral blood and bone marrow. The primary endpoint was the proportion of patients that reached undetectable MRD in both the peripheral blood and bone marrow. A post-hoc analysis was performed to find out whether ΔMRD (decrease in MRD by immunosequencing from baseline to day one of cycle five) predicts early bone marrow undetectable MRD. MRD was measured from the end of treatment to recurrent detectable MRD at equal or greater than 10-5 or last immunosequencing assessment. The primary cohort is closed to recruitment, and recruitment continues in an expansion cohort.

Of the 39 patients enrolled, 95% received at least two cycles of therapy and underwent MRD and response assessment. Twenty-eight (72%) of 39 patients had unmutated immunoglobulin heavy-chain variable-region and five (13%) had 17p deletion or TP53 mutation. After a median follow-up of 25.8 months, 89% of the patients had undetectable MRD in both blood and bone marrow, meeting the pre-specified criteria to stop therapy. Median time to bone marrow undetectable MRD was eight months. All patients (37/37) had an overall response and 21 (57%) had a complete response or complete response with incomplete marrow recovery. Thirty-three of 37 patients reached the prespecified MRD endpoint and discontinued therapy after a median of ten cycles. Furthermore, 8% of patients completed 24 cycles and stopped therapy with detectable bone marrow MRD. Median progression-free survival was not reached, with only one patient having progressive disease. All patients who met the undetectable MRD endpoint and discontinued therapy showed successful treatment discontinuation and 94% had ongoing undetectable MRD in the peripheral blood following a median time of 15.8 months.  The most common adverse events (AEs) were thrombocytopenia (59%), fatigue (54%), neutropenia (51%) and bruising (51%). The most common AE of grade 3 or worse was neutropenia (18%). One death occurred because of intracranial haemorrhage on day one of cycle one after initiating intravenous heparin for pulmonary emboli.

In the post-hoc analysis, a ΔMRD reduction to 1/400th of the baseline ΔMRD (2.6 log, ΔMRD400) was identified as the optimal cut-off point for predicting undetectable MRD by the end of cycle 8.  MRD was evaluated every three months in 31 (94%) patients who discontinued therapy after reaching the pre-specified MRD endpoint.  Median time to recurrent detectable MRD at 10–⁵ was not reached and was longer among patients who had ΔMRD400. Among 21 patients who reached ΔMRD400, all had bone marrow undetectable MRD after a median of six cycles and later met the pre-specified MRD treatment discontinuation criterion to stop therapy.

The BOVen regimen was well tolerated and met its primary endpoint, with 33 (89%) of 37 previously untreated patients with chronic lymphocytic leukaemia or small lymphocytic lymphoma reaching undetectable MRD in both peripheral blood and bone marrow despite a median treatment duration of only 10 months, owing to an undetectable MRD-driven treatment discontinuation design. ΔMRD400 was identified as a potential biomarker to guide duration of therapy. ΔMRD400 identifies patients who reach early bone marrow undetectable MRD and defines a cohort of patients with high-risk biology at increased risk for MRD recurrence after treatment discontinuation. These data support further evaluation of the BOVen regimen in chronic lymphocytic leukaemia and small lymphocytic lymphoma with treatment duration guided by early MRD response kinetics.