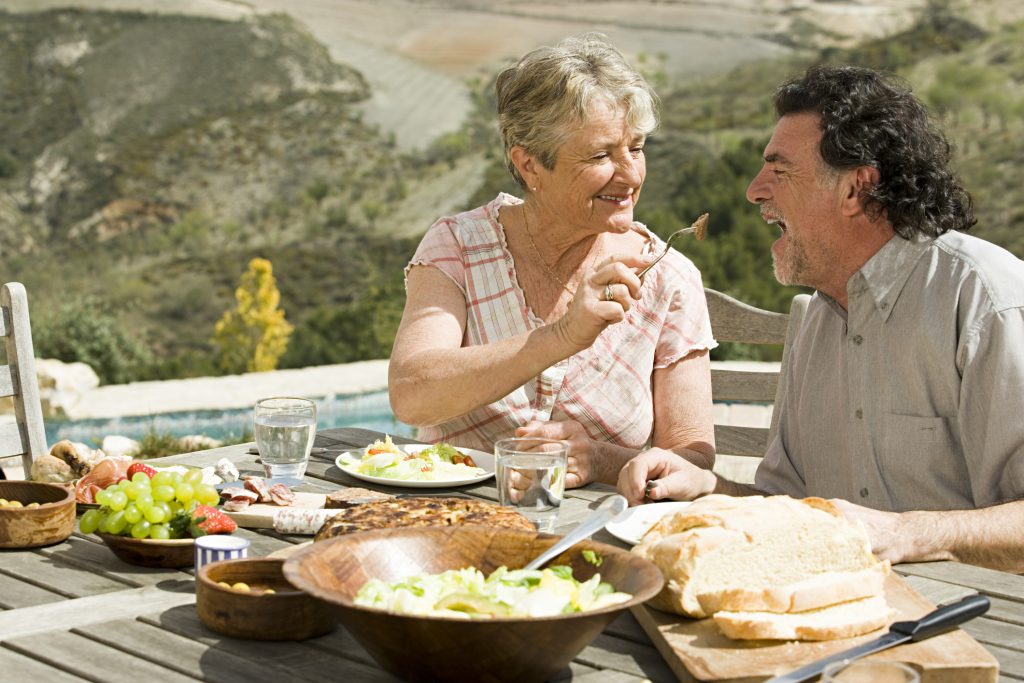 Eating like an Italian, Greek or Spaniard: that conjures up images of a delicious diet full of fresh fish, vegetables, basil, tomatoes and olive oil. It’s a popular diet choice for people who want to lose weight, but the mediterranean diet is linked to other nutritional benefits as well. One of those, that has recently been the focus of attention is its effect on the gut microbiome, especially in elderly people. A comprehensive study into this effect by an Irish team was recently published in the medical publication Gut.

The beneficial effect of a mediterranean diet on cholesterol levels has been known for a long time, but researchers from Cork University discovered that a mediterranean diet improves the gut microbiome, and that triggers many other health benefits, such as a lower chance of coronary disease, inflammations of the bowels, and even colorectal cancers.

For their research, the Irish scientists followed a group of 612 persons between 65 and 79 years old, who came from five European countries: France, Italy, Poland, the United Kingdom and the Netherlands. They were subdivided into two groups: one group of 289 people who contnued on their regular diet, and one group of 323 people who switched to a mediterranean diet for one year. Before starting the test, all patients had their general condition assessed as well as their gut microbiome examined. Based on this test, they were classified as being ‘non fragile’ or ‘pre-fragile’.

After one year, the group that had followed the mediterranean diet had a much more varied gut microbiome than the other group. And their fragility had diminished, as could be seen from their cognitive functions as well as hand strength. They also seemed to have a lower risk for intestinal infection.

Specifically, there were more gut bacteria present that produced short chain fatty acids (SFCA’s), which are linked to several health benefits. At the same time, bacteria with known health risks, such as insulin resistance and non-alcohol related liver fattening diminished.

According to the researchers gut microbiome diversity can be related to a higher intake of fibers, minerals and vitamins, such as vitamin C. Interestingly, participants from all five countries ended up with a similar microbiome, while there were big differences before the trial period started.

The research team does warn that a mediterranean diet may not be a feasible option for every older person. This can depend on their overall medical condition, but also on availability of certain foods in their particular location. It is therefore recommended that elderly people who consider dramatically changing their diet contact their physician first.

Many cuisines, many choices

Of course there is no such thing as a mediterranean diet, since the region is vast and diverse. Still, there are a few common denominators in the cuisines of geographically distant regions like Portugal, Italy, Greece and Israel. All of these cuisines feature lots of fruits, vegetables and legumes, along with frequent helpings of fish, poultry and eggs. Red meats and dairy, on the other hand, feature less prominently. And equally important as the actual food is the social context: in mediterranean countries eating often involves a social gathering with friends and relatives, as well as a more active, outdoorsy lifestyle.

Perhaps the most ideosyncratic mediterranean ingredient is olive oil. Olive oil, especially cold-pressed extra virgin olive oil, does not contain saturated fats or trans fats, both of which are linked to a higher risk of coronary disease and heart failure. The good fats in olive oil actually lower cholesterol levels. Nuts and seeds, that also feature in a mediterranean diet, are also rich in unsaturated fats. And fish, which is another mediterranean staple, contains lots of omega-3 fats, especially fish like salmon, mackrel and sardines.

Seven steps to a mediterranean diet

Read the full article by the research team from Cork in French HERE.