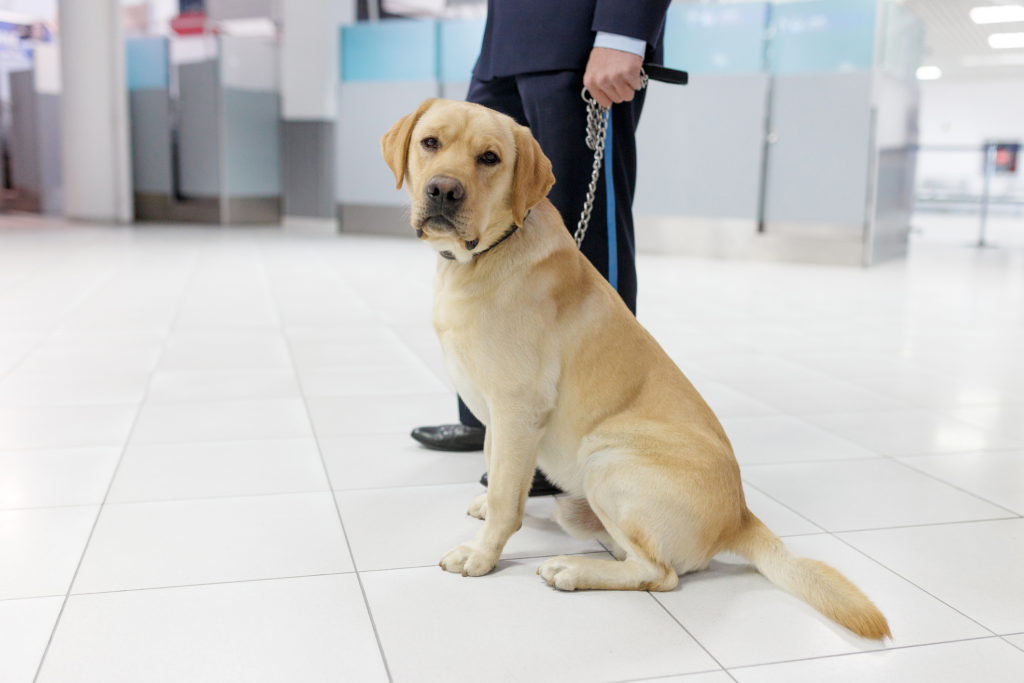 Are ‘coronadogs’ set to become a regular feature of international airports? It may well be in the works, because this week four especially trained sniffer dogs have started their job as corona-test unit. A study by the university of Helsinki and financed by the Finnish government is meant to shed light on whether dogs can provide fast, safe, affordable and accurate corona tests.

According to lead researcher Anna Hielm-Björkman the entire testing process can be done withing a minute, and a dog only needs a mere 10 seconds to sniff out whether someone carries the corona virus or not. “This is very promising”, she comments, “and if this method truly works it could be applied to a wide range of locations.” These include not only airports, but also stations, hospitals, care homes as well as sporting and cultural venues.

Dogs have a sense of smell that is 1,000 times more sensitive than the human nose. They do not come in direct contact with passengers, but sniff a tissue that the passengers have been asked to rub against their skin. In a separate room the tissue is presented to the dog, among a set of control tissues that do not contain the virus. If the dog detects the virus it will signal it, either by sitting or lying down, or by indicating with its paw or yelping.

If the dog has identified the virus on a tissue, the passenger who provided the tissue is taken to a separate facility on Vantaa airport and asked to undergo a polymerase chain reaction (PCR) test free of charge. Should this test come up as positive, the passenger may be barred from boarding a flight and asked to quarantaine. Arriving passengers who are literally sniffed out this way may also be required to undergo quarantaine.

Prior testing at Helsinki university shows that the dogs are able to detect the virus is almost 100% of the time. Especially impressive, according to the researchers, is the dogs’ ability to recognize the virus in samples from people who are not showing any symptoms.

The idea of training dogs to sniff out the corona virus is not as far-fetched as it may seem. Dogs have been shown to be able to learn how to recognize a wide range of illnesses, from diabetes to Parkinson’s and even certain types of cancer. How this mechanism works exactly is not yet known. According to recent French research, dogs can pick up on certain components in human sweat that are associated with the corona virus. A dog only needs between 10 and 100 molecules in order to be able to detect the virus. In comparison, a PCR-test requires around 18 million molecules in order to provide a result.

The Finnish study will take 4 months, and 16 dogs will be trained by specialized company Wise Nose, 10 of which will be deployed on Vantaa airport. The total cost for the state-funded program is estimated around 300,000 euro. But it is expected that the sniffer dogs will end up being much more cost-effective than the current testing methods, especially since the dogs are able to process much larger numbers of people in a shorter amount of time, compared to lab testing.

There have been concerns raised that the dogs might become infected themselves, or transfer the virus onto other dogs and humans. According to researcher Hielm-Björkman there is no risk of these things happening. The corona virus has been shown to affect certain animals, such as cats and minks, but dogs lack the receptors that the virus needs in order to infect a body.

Helsinki is not the only airport that deploys corona sniffer dogs, recently a similar project started at Dubai International Airport. Several other countries have also been investigating the same strategy, such as Australia, France, the USA, the UK, Chile, Iran and Germany. In the latter, the university of Hannover reports a 94% accuracy rate with 8 dogs who were trained to smell the virus from saliva samples.